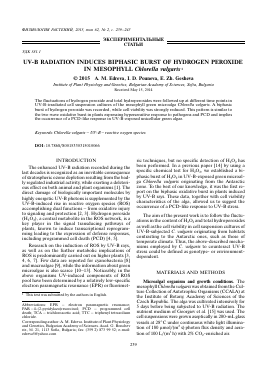 The fluctuations of hydrogen peroxide and total hydroperoxides were followed up at different time points in UV-B-irradiated cell suspension cultures of the mesophyll green microalga Chlorella vulgaris. A biphasic burst of hydrogen peroxide was recorded, while cell viability was strongly reduced. This pattern is similar to the two-wave oxidative burst in plants expressing hypersensitive response to pathogens and PCD and implies the occurrence of a PCD-like response in UV-B-exposed unicellular green algae.

The enhanced UV-B radiation recorded during the last decades is recognized as an inevitable consequence of stratospheric ozone depletion resulting from the badly regulated industrial activity, while exerting a deleterious effect on both animal and plant organisms [1]. The direct damage of biologically important molecules by highly energetic UV-B photons is supplemented by the UV-B-induced rise in reactive oxygen species (ROS) accomplishing dual functions - from oxidative injury to signaling and protection [2, 3]. Hydrogen peroxide (H2O2), a central metabolite in the ROS network, is a key player in the signal transducing pathways of plants, known to induce transcriptional reprogramming leading to the expression of defense responses, including programmed cell death (PCD) [4, 5].

Research on the induction of ROS by UV-B rays, as well as on the further metabolic implications of ROS is predominantly carried out on higher plants [3, 4, 6, 7]. Few data are reported for cyanobacteria [8] and macroalgae [9], while the information about green microalgae is also scarce [10-13]. Noticeably, in the above organisms UV-induced components of ROS pool have been determined by a relatively low-specific electron paramagnetic resonance (EPR) or fluorimet-

ric techniques, but no specific detection of H2O2 has been performed. In a previous paper [14] by using a specific chemical test for H2O2, we established a biphasic burst of H2O2 in UV-B-exposed green microalga Chlorella vulgaris originating from the Antarctic zone. To the best of our knowledge, it was the first report on the biphasic oxidative burst in plants induced by UV-B rays. These data, together with cell viability characteristics of the alga, allowed us to suggest the occurrence of a PCD-like response to UV-B stress.

The aim of the present work is to follow the fluctuations in the content of H2O2 and total hydroperoxides as well as the cell viability in cell suspension cultures of UV-B-subjected C. vulgaris originating from habitats contrasting to the Antarctic ones, such as those of temperate climate. Thus, the above-described mechanisms employed by C. vulgaris to counteract UV-B stress could be defined as genotype- or environment-dependent.

Microalgal organism and growth conditions. The

mesophyll Chlorella vulgaris was obtained from the Culture Collection of Autotrophic Organisms (CCALA) at the Institute of Botany, Academy of Sciences of the Czech Republic. The alga was cultivated intensively for 5 days before being subjected to UV-B radiation. The nutrient medium of Georgiev et al. [15] was used. The cell suspensions were grown aseptically in 200-mL glass vessels at 28°C under continuous white light illumination of 180 ^mol/(m2 s) photon flux density and aeration of100 L/(m3 h) with 2% CO2-enriched air.

Fig. 1. Content of H2O2 in mesophyll Chlorella vulgaris cell cultures irradiated with UV-B at different exposure times. Control — non-irradiated cell cultures. The values are means of two experiments, each with three replicates. The standard errors (±SE) are presented. Significance of differences at P< 0.05% is designated by different letters.

UV-B treatment and sampling. Exponentially grown cultures with cell density of 1.5 mg dry matter/mL were placed in open Petri dishes as a 3-mm-deep layer. Cells were exposed to UV-B radiation for 15, 30, 60, and 240 min. As a source of UV-B radiation two Philips UV-B tubes (TL 20 W/12, the Netherlands) with main output at 312 nm were used. The intensity of radiation was 7.5 W/m2. During UV-B treatment suspensions were gently agitated by magnetic stirrer to provide uniform exposure. Samples were taken at each time point of irradiation. Non-irradiated suspension cultures were used as controls.

Determination of H2O2. The determination of H2O2 content was carried out after Patterson et al. [16]. Extracts in 5% (w/v) trichloroacetic acid (TCA) were used for colorimetric measurements. The color reaction is based on the interaction of H2O2 with a complex of Ti (IV) salt and 4-(2-pyridylazo)resorci-nol (PAR), resulting in the formation of a ternary complex Ti (IV)-PAR-H2O2, an orange-pink product with absorption maximum at 508 nm. The reaction is specific for H2O2, without interference of other peroxides or ROS.

Determination of cell viability. Cell viability was estimated by the method of Steponkus and Lanphear [18],

using triphenyl tetrazolium chloride (TTC). Viable cells are characterized by the deposition of dark-red crystals of formazan resulting from the enzymatic reduction of TTC. The cell suspensions were extracted with 96% (v/v) ethanol, and the absorbance of the red-colored product was read at 530 nm. The percentage of viable cells was calculated.

Statistical analysis. Data are expressed as means of two independent experiments each with three replicates (± SE). Comparison of means was done using the Fisher's least significant difference (LSD) test at P < 0.05 after performing multifactor ANOVA. The statistical software package StatGraphics Plus v. 5.1 for Windows was used.

Control — non-irradiated cell cultures. The values are means of two experiments, each with three replicates. The standard errors (±SE) are presented. Significance of differences at P< 0.05% is designated by different letters.

ides followed a course similar to the pattern of H2O2, with a rise at 15 min of UV-B exposure (176.6% of control), a peak at 30 min (252.1% of control), a decrease at 60 min, and a second, smaller peak (230.7% of control) after 240 min of UV-B irradiation (fig. 2). However while subtracting the content of H2O2 from the content of total hydroperoxides, it became evident that the difference, i.e., the fraction, which can be designated as organic hydroperoxides, did not follow a bi-phasic burst course. This fraction also rose up from 200.21 to 435.00 nmol/g dry wt at 30 min UV-B irradiation, reaching 217% of control, but at longer UV-B exposure times (60 and 240 min of irradiation) the content of total organic peroxides remained almost constant (229 and 216% of control, respectively). Hence, the biphasic burst of total hydroperoxides can be attributed to the fluctuations of H2O2 only.

In the cells of non-irradiated C. vulgaris suspension, dense deposition of dark-red formazan crystals was observed, featuring the high cell viability. During UV-B treatment, a continuous decline of cell viability was observed, the ratio of viable cells being 90% after 15 min of irradiation, and 80 and 60% after 30 min and 60 min, respectively. In the cells after 240 min exposure to UV-B, no red crystals were visible, which points to the loss ofviability. The percentage of not-viable (dead) cells amounted to 97%.

The presence of basic levels of H2O2 in non-irradiated mesophyll C. vulgaris cultures, comparable to those

registered in non-stressed higher plants [16], is in line with the claiming that low, stationary ROS levels are intrinsic to normal