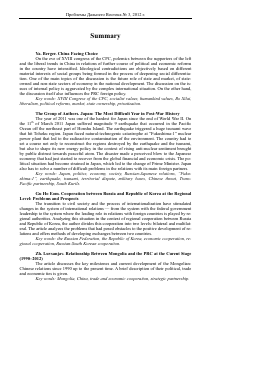 On the eve of XVIII congress of the CPC, polemics between the supporters of the left and the liberal trends in China in relations of further course of political and economic reforms in the country have intensified. Ideological contradictions are objectively based on different material interests of social groups being formed in the process of deepening social differentiation. One of the main topics of the discussion is the future role of state and market, of state-owned and non-state sectors of economy in the national development. The discussion on the issues of internal policy is aggravated by the complex international situation. On the other hand, the discussion itself also influences the PRC foreign policy.

The Group of Authors. Japan: The Most Difficult Year in Post-War History

The year of 2011 was one of the hardest for Japan since the end of World War II. On the 11th of March 2011 Japan suffered magnitude 9 earthquake that occurred in the Pacific Ocean off the northeast part of Honshu Island. The earthquake triggered a huge tsunami wave that hit Tohoku region. Japan faced natural-technogenic catastrophe at "Fukushima-1" nuclear power plant that led to the radioactive contamination of the environment. The country had to set a course not only to reconstruct the regions destroyed by the earthquake and the tsunami, but also to shape its new energy policy in the context of rising anti-nuclear sentiment brought by public distrust towards peaceful atom. The disaster made a perceived blow to the Japanese economy that had just started to recover from the global financial and economic crisis. The political situation had become strained in Japan, which led to the change of Prime Minister. Japan also has to solve a number of difficult problems in the relations with its main foreign partners.

Gu Ho Eom. Cooperation between Russia and Republic of Korea at the Regional Level: Problems and Prospects

The transition to civil society and the process of internationalization have stimulated changes in the system of international relations — from the system with the federal government leadership to the system where the leading role in relations with foreign countries is played by regional authorities. Analyzing this situation in the context of regional cooperation between Russia and Republic of Korea, the author divides this cooperation into two levels: bilateral and multilateral. The article analyzes the problems that had posed obstacles to the positive development of relations and offers methods of developing exchanges between two countries.

Zh. Luvsanjav. Relationship Between Mongolia and the PRC at the Curent Stage (1990-2012)

The article discusses the key milestones and current development of the Mongolian-Chinese relations since 1990 up to the present time. A brief description of their political, trade and economic ties is given.

The article is dedicated to the increasing role of BRICS in post-crisis global transformations. It deals with the issue of gradual rooting of BRICS in the system of the international relations. A special attention is given to the potentialities of Russia in BRICS.

L. Bony. The Strategy for Urban-Rural Integration in China: Results, Problems and Contradiction (2002-2010)

The article deals with the preliminary results of the strategy for coordinated urban-rural development in China and their integration, as the principal course towards solving the Chinese agrarian problem in the beginning of XXI century. Special attention is given to the analysis of the land problem in rural China, that had aggravated to become the main obstacles to implementation of the strategy. The study reveals the key role and special function of land resources in accelerating urbanization, as well as deep impact of the urbanization itself on social and economic life in rural China. It finally analyses the prospects of forthcoming reforms in land management and requisition systems in rural China.

P. Em. Development Peculiarities of Urbanization and Settlement System's in the Republic of Korea from the Second Part of XX Century to the Beginning of XXI Century

Some specific features of urbanization development in the Republic of Korea from the second part of XX century to the beginning of XXI century are studied. The role of urbanization in activation of commuting and rapid disproportion of population distribution is also analyzed.

V. Vorobyev. About the Settlement of the Border Issues with China.

40 years of talks (19642004) resulted in the settlement of all border issues between Russia and China on the mutually accepted basis. The agreements of 1991, 1994 and 2004, which were passed through ratification, did not establish a new border, but only introduced some corrections into already existing and recognized borderline. Today we have the 4300-km Russian-Chinese border clearly demarcated in full.

I. Pozhilov. Contemporary Historiography of the PRC on the Zhu De Concept of "Chinese Socialism"

The article presents an analysis of the most significant publications by the PRC' historians in last decade, devoted to ideas of Zhu De —a member of the first PRC leadership — on building "Chinese form" of socialism. His concept of socialist construction is considered of "socialism in today's China as the first attempt in PRC leadership to find the specifically Chinese form of socialism, different from the Soviet model, as well as from the so called "barracks communism". The paper also deals with the problem of restoration of genuine status role of Zhu De and his real contribution to the victory of the revolution and formation of the New China.

V. Datsishen. "Komatsubary Mission". From the History of Soviet-Japanese-Chinese Relations in the Beginning of Early 1930's

The article is devoted to a very important, but little-known episode in the history of international relations in the Far East — Japan's "Komatsubara Mission" in the Trans-Baikal region late in 1932. Well-measured and competent actions of the Soviet representatives in regard to this mission were an important factor of relative stability in the Soviet-Japanese-Chinese Relations during that complex period.

The second part of the essay describes the most controversial stages of Bao Dai's political biography: emperor-puppet of Japanese militarists in 1940-1945; the August Revolution and the declaration of independence of Vietnam; the abdication and an appointment to be an adviser of the Ho Chi Minh's government. After France's "return" into Vietnam he was at the helm of the power again as a "head of State." Finally, after France leaved Vietnam, he lost his post and more than two decades lived in vegetation in the former metropolis without titles and regalia as a private person.

Key words: Japan in Indochina, August Revolution, abdication, adviser of the Ho Chi Minh s government, "the head of the State of Vietnam ", the citizen of France.

E. Ikonnikova. The Kuril Islands in Russian Literature of the XX Century