научная статья по теме VARIATIONS OF THE GLACIER NO.1 AT THE SOURCE OF THE URUMQI RIVER, TIEN SHAN MTS., CHINA, DURING THE PAST 40 YEARS Геофизика 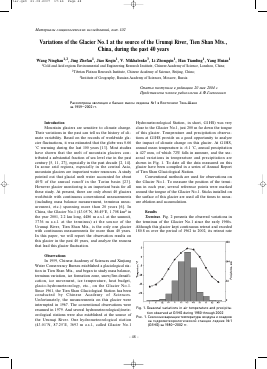 Текст научной статьи на тему «VARIATIONS OF THE GLACIER NO.1 AT THE SOURCE OF THE URUMQI RIVER, TIEN SHAN MTS., CHINA, DURING THE PAST 40 YEARS»

Variations of the Glacier No.1 at the source of the Urumqi River, Tien Shan Mts.,

China, during the past 40 years

Mountain glaciers are sensitive to climate change. Their variations in the past can tell us the history of climate variability. Based on the records of worldwide glacier fluctuations, it was estimated that the globe was 0.66 °C warming during the last 100 years [13]. Most studies have shown that the melt of mountain glaciers contributed a substantial fraction of sea level rise in the past century [5, 11, 27], especially in the past decade [2, 14]. In some arid regions, especially in the central Asia, mountain glaciers are important water resources. A study pointed out that glacial melt water accounted for about 40% of the annual runoff in the Tarim basin [23]. However glacier monitoring is an important basis for all these study. At present, there are only about 40 glaciers worldwide with continuous conventional measurements (including mass balance measurement, terminus measurement, etc.) spanning more than 20 years [6]. In China, the Glacier No.1 (43.05°N, 86.49°E, 1.708 km2 in the year 2001, 2.2 km long, 4486 m a.s.l. at the summit, 3736 m a.s.l. at the terminus) at the source of the Urumqi River, Tien Shan Mts., is the only one glacier with continuous measurements for more than 40 years. In this paper, we will report the observation results on this glacier in the past 40 years, and analyze the reasons that lead this glacier fluctuation.

In 1959, Chinese Academy of Sciences and Xinjiang Water Conservancy Bureau established a glaciological station in Tien Shan Mts., and began to study mass balance, terminus variation, ice formation zone, snow/firn densifi-cation, ice movement, ice temperature, heat budget, glacio-hydrometeorology, etc., on the Glacier No.1. Since 1961, the Tien Shan Glaciological Station has been conducted by Chinese Academy of Sciences. Unfortunately, the measurements on this glacier were interrupted in 1967. The conventional observations were resumed in 1979. And several hydrometeorological/mete-orological stations were also established at the source of the Urumqi River. One hydrometeorological station (43.01°N, 87.25°E, 3693 m a.s.l., called Glacier No.1

Hydrometeorological Station, in short, G1HS) was very close to the Glacier No.1, just 200 m far down the tongue of this glacier. Temperature and precipitation observations at G1HS provide us a good opportunity to analyze the impact of climate change on this glacier. At G1HS, annual mean temperature is -6.1 °C, annual precipitation is 427 mm, of which 72% falls in summer, and the seasonal variations in temperature and precipitation are shown in Fig. 1. To date all the data measured on this glacier have been compiled in a series of Annual Report of Tien Shan Glaciological Station.

Conventional methods are used for observations on the Glacier No.1. To measure the position of the terminus in each year, several reference points were marked around the tongue of the Glacier No.1. Sticks installed on the surface of this glacier are used all the times to measure ablation and accumulation.

Terminus. Fig. 2 presents the observed variations in the terminus of the Glacier No.1 since the early 1960s. Although this glacier kept continuous retreat and receded 180.8 m over the period of 1962 to 2002, its retreat rate

Fig. 3. Sketch map of the boundaries of the Glacier No.1 at

Fig. 4. Area changes of the Glacier No.1 in the past 40 years Рис. 4. Изменение площади ледника №1 за последние 40 лет

during 1992 to 1994. This might be related with the fact that the Glacier No.1 separated completely into two small glaciers/branches, east and west glaciers/branches, in 1993. The separation could make a large ice-free area in the previous conjunction between those two branches.

Equilibrium Line Altitude (ELA). Fig. 5 b illustrates variations in ELA of the Glacier No.1 in the past 40 years. The mean ELA was 4056 m a.s.l. over the period of 1958/1959 to 2001/2002. Although the ELA showed large fluctuations, it had a general increase trend. If fitted a linear trend to the observed data, the ELA rose about 45 m over that entire period.

Fig. 5. Mass balance variations (a) and ELA variations (b) of the Glacier No.1 in the past 40 years: 1 — the observation data, 2 — the interpolation values estimated by [25, 26] using the correlation between the observed mass balance and ELA with meteorological data Рис. 5. Баланс массы (а) и колебания высоты границы питания (ELA) (b) ледника №1 за последние 40 лет:

We know mass balance value in a balance year is mostly controlled by the climatic conditions in that same balance year. So we analyze the correlation between climatic factors (only temperature and precipitation are

Fig. 6. Cumulative departures of the Glacier No.1 mass balance relative to its mean in 1961 — 1990 "climatological normal" period