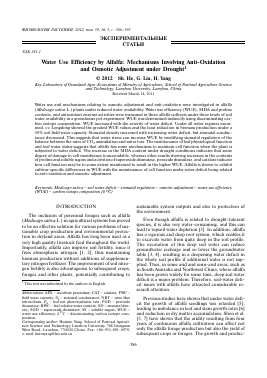 Water use and mechanisms relating to osmotic adjustment and anti-oxidation were investigated in alfalfa (Medicago sativa L.) plants under reduced water availability. Water use efficiency (WUE), MDA and proline contents, and antioxidant enzyme activities were measured in three alfalfa cultivars under three levels of soil water availability in a greenhouse pot experiment. WUE was determined indirectly using discriminating carbon isotope composition. WUE increased with the severity of water deficit. Under all water regimes examined, cv. Longdong showed the greatest WUE values and the least reduction in biomass production under a 50% soil field water capacity. Stomatal density increased with increasing water deficit, but stomatal conductance decreased. This suggests that water stress can increase WUE by modifying stomatal regulation of the balance between the rates of CO2 assimilation and water loss. The maintenance of leaf physiological function and leaf water status suggests that alfalfa has some mechanisms to maintain cell function when the plant is subjected to water deficit. The increase in the MDA content under drought conditions indicates that some degree of damage to cell membranes is unavoidable, whereas other results showing increases in the contents of proline and soluble sugars and activities of superoxide dismutase, peroxide dismutase, and catalase indicate how cell function may be to some extent maintained to result in the higher WUE. Alfalfa is shown to exhibit cultivar-specific differences in WUE with the maintenance of cell function under water deficit being related to anti-oxidation and osmotic adjustment.

The inclusion of perennial forages such as alfalfa (Medicago sativa L.) in agricultural systems has proved to be an effective solution for various problems of sustainable crop production and environmental protection in dryland areas. Alfalfa has long been used as a very high quality livestock feed throughout the world. Importantly, alfalfa can improve soil fertility, since it fixes atmospheric nitrogen [1, 2], thus maintaining biomass production without additions of supplementary nitrogen fertilizer. The improvement of soil nitrogen fertility is also advantageous to subsequent crops, forages and other plants, potentially contributing to

sustainable system outputs and also to protection of the environment.

Even though alfalfa is related to drought-tolerant species, it is also very water-consuming, and this can lead to topsoil water depletion [3]. In addition, alfalfa has a vigorous and deep root system, which enables it to excavate water from quite deep in the soil profile. The excavation of this deep soil water can reduce groundwater recharge and so lower the groundwater table [3, 4], resulting in a deepening water deficit in the whole soil profile if additional water is not supplied. Thus, in some arid and semi-arid areas, such as in South Australia and Northwest China, where alfalfa has been grown widely for some time, deep soil water deficit is a major problem. Therefore, soil-water deficit issues with alfalfa have attracted considerable research attention.

Previous studies have shown that under water deficit the growth of alfalfa seedlings was retarded [5], leading to imbalance in leaf and stem growth rates [6] and reduction in dry matter accumulation. Shen et al. [3, 7] have shown that the aridity resulting from four years of continuous alfalfa cultivation can affect not only the alfalfa forage production but also the yield of subsequent crops or forages. The growth and produc-

tivity of alfalfa under water deficit were closely related to its water use efficiency (WUE).

Compared with other forage species, such as clover, alfalfa performs better under water stress [8]. This has been attributed to osmotic adjustment and to stomatal regulation, which together result in relatively stable rates of CO2 assimilation [9]. Evidence has been presented that some compounds, e.g., proline [10, 11], soluble sugars (SS) [10], superoxide dismutase (SOD)

[13], were involved in this osmotic adjustment under water stress. These results confirm that alfalfa tolerance to oxidative stress is an important component of its adaptation to arid environments.

Water deficit has long been one of the most serious problems on the Loess Plateau of northwestern China and may worsen here and in many other areas of the world with future climate changes. In this area of China, the water supply shortage limits plant growth and survival, so that plant performance and distribution are restricted. Moreover, water shortage is a threat to sustainable crop production and thus to the fragile natural ecosystems of these arid and semi-arid regions. Therefore, the inclusion of alfalfa in crop production systems will be less damaging if its WUE is maximized. However, the mechanisms, by which various alfalfa cultivars adapt to specific environmental limitations, particularly to water deficits, still await a detailed investigation. In this connection, this study examines water-use traits in three common alfalfa cultivars under conditions of water deficit and identifies specific mechanisms that relate to anti-oxidation and osmotic adjustment.

Experimental design. The experiment was conducted in a greenhouse. The common cultivated soil from local farms was placed in plastic pots (diameter 30 cm, height 40 cm). The soil was loess having a FWC (field water capacity) of 31%. Mixed nitrogen fertilizer of 1 g urea and 4 g (NH4^HPO4 was mixed into the soil (14 kg per pot) prior to filling. Three alfalfa (Med-icago sativa L.) cultivars (Algonquin, Xinjiangdaye, and Longdong) were selected for this study. Uniform seeds were sown directly into the pots in April 2008. After establishment, 30 healthy plants were maintained per pot. Three water availabilities were established from 45 days after sowing, being 75, 50, and 25% of FWC. Four replicate pots were established per water-availability treatment. Pots were watered manually every two days to maintain the treatment soil water contents using a weighing method. The duration of the water-deficit treatments was about 35 days. The 36 pots were arranged randomly in the greenhouse (three cultivars x three water treatments x four replicates). Measurements were carried out at the beginning of flowering in late July.

Measurement of stomatal density (SD). The upper fully-expanded leaves were selected, and stomata were observed under a microscope ("Leica CME", India). Eight leaves from each of five plants were selected randomly from each pot, and three epidermal strips were peeled from each leaf. For each strip, the number (n) of stomata appearing in each of six fields was counted (8 x 5 x 36 fields per treatment per cultivar). SD was expressed as stomata number per unit leaf area (n/mm2).

Notes: FWC — soil field water capacity. Fresh and dry biomass data are means (±SEM) of four replicates (20 plants). Significances (* P = 0.05, ** P = 0.01, and ns = not significant) are between differences among treatments within each cultivar. A