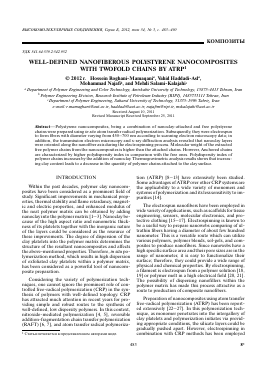 WITH TWOFOLD CHAINS BY ATRP1

Abstract—Polystyrene nanocomposites, being a combination of nanoclay-attached and free polystyrene chains were prepared using in situ atom transfer radical polymerization. Subsequently, they were electrospun to form fibers with diameter varying from 450—700 nm according to scanning electron microscopy data; in addition, the transmission electron microscopy and x-ray diffraction analysis revealed that nanoclay layers were oriented along the nanofiber axis during the electrospinning process. Molecular weight of the extracted free polymer chains from the nanocomposites is higher than the attached chains. However, Anchored chains are characterized by higher polydispersity index in comparison with the free ones. Polydispersity index of polymer chains increases by the addition of nanoclay. Thermogravimetric analysis results shows that increasing clay content leads to a decrease in the quantity of polymer chains attached to the clay surface.

Within the past decades, polymer clay nanocomposites have been considered as a prominent field of study. Significant improvements in mechanical properties, thermal stability and flame retardancy, magnetic and electric properties, and enhanced modulus of the neat polymer matrix can be obtained by adding nanoclay into the polymer matrix [1—3]. Nanoclay because of the high aspect ratio and nanometric thickness of its platelets together with the inorganic nature of the layers could be considered as the resource of these improvements. The degree of dispersion of the clay platelets into the polymer matrix determines the structure of the resultant nanocomposites and affects the above-mentioned properties. Therefore, in situ polymerization method, which results in high dispersion of exfoliated clay platelets within a polymer matrix, has been considered as a powerful tool of nanocom-posite preparation.

tion (ATRP) [8—13] have extensively been studied. Some advantages ofATRP over other CRP systems are the applicability to a wide variety of monomers and systems of polymerization and its less sensitivity to impurities [14].

The electrospun nanofibers have been employed in wide variety of applications, such as scaffolds for tissue engineering, sensors, molecular electronics, and protective clothing [15—17]. Electrospinning is known to be a useful way to prepare nanowebs comparing of ul-trathin fibers having a diameter of about few hundred nanometer. This is a versatile route which can utilize various polymers, polymer blends, sol-gels, and composites to produce nanofibers. Since nanowebs have a high specific surface area and their pore sizes are in the range of nanometer, it is easy to functionalize their surface; therefore, they could provide a wide range of physical and chemical properties. By electrospinning, a filament is electrospun from a polymer solution [18, 19] or polymer melt in a high electrical field [20, 21]. The possibility of dispersing nanofillers within the polymer matrix has made this process attractive as a route to production of composite nanofibers.

Preparation of nanocomposites using atom transfer free-radical polymerization (ATRP) has been reported extensively [22—27]. In this polymerization technique, as monomer penetrates into the intergallery of clay platelets and polymerization initiates via providing appropriate conditions, the silicate layers could be gradually pushed apart. However, electrospinning in combination with CRP methods has been employed

A quaternary alkylammonium cation having a double bound in its structure was employed as the pristine clay modifier. A suspension of 4.5 g of Na- montmorillonite with a CEC value of 92 mEq/100 g in 200 ml of distilled water was stirred in a round-bottom flask over 5 h. In another flask, 1.05 g of intercalating agent and 200 ml ethanol were stirred for 5 h. The modifier solution in ethanol was added drop-wise to the clay suspension. After the solution was stirred overnight, the white precipitated part was filtered, washed with 80/20 (v/v) methanol/water mixture several times until no chloride ion could be detected by an AgNO3 solution.

The ATRP polymerizations were performed in a 250 ml reactor, which was placed in an oil bath ther-mostated at the desired temperature. A number of batch polymerizations were run at 110° C in bulk with the molar ratio of 140:1:1:1 for [styrene]:[EBiB]:[Cu-Br]:[PMDETA]. The reactor was degassed and backfilled with nitrogen gas three times, and then left under N2. The batch experiments were run by orderly adding deoxygenated monomer (styrene, 32.2 ml, 0.02 mol), modified montmorillonite, catalyst (CuBr, 0.287 g, 0.002 mol), ligand (PMDETA, 0.417 ml, 0.002 mol), and 0.50 ml of deoxygenated anisole as an internal standard to the reactor and then increasing the reaction temperature to 110° C (within about 15 min.). The solution turned light green as the CuBr/PMDETA complex formed. Finally, after the majority of the metal complex had formed, initiator (EBiB, 0.293 ml, 0.002 mol) was added to the system to start the styrene ATRP. A sample was taken before the reaction started and used as a comparison reference for the samples later taken at the different stages of the reaction so as to measure the monomer conversion.

Separation of Polymer Chains from Clay

The polymer samples were dissolved in THF and passed through a neutral aluminum oxide column to remove catalyst particles. By high-speed ultracentrifu-gation and then passing the solution through a 0.2 mm filter, the unattached polymer chains were separated from the anchored ones by passing through the filter pores [33]. The remained tethered chains were cleaved from the layer