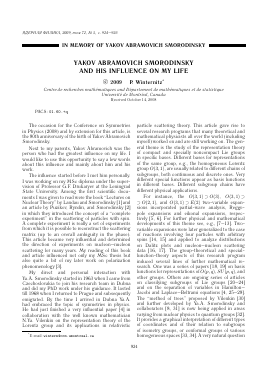 IN MEMORY OF YAKOV ABRAMOVICH SMORODINSKY

YAKOV ABRAMOVICH SMORODINSKY AND HIS INFLUENCE ON MY LIFE

The occasion for the Conference on Symmetries in Physics (2008) and by extension for this article, is the 90th anniversary of the birth of Yakov Abramovich Smorodinsky.

Next to my parents, Yakov Abramovich was the person who had the greatest influence on my life. I would like to use this opportunity to say a few words about this influence and mainly about him and his work.

The influence started before I met him personally. I was working on my MSc diploma under the supervision of Professor G.F. Drukaryev at the Leningrad State University. Among the first scientific documents I was given to read were the book "Lectures on Nuclear Theory" by Landau and Smorodinsky [1] and an article by Puzikov, Ryndin, and Smorodinsky [2] in which they introduced the concept of a "complete experiment" in the scattering of particles with spin. A complete experiment is really a set of experiments from which it is possible to reconstruct the scattering matrix (up to an overall ambiguity in the phase). This article became very influential and determined the direction of experiments on nucleon—nucleon scattering for many years. My reading of this book and article influenced not only my MSc thesis but also quite a bit of my later work on polarization phenomenology [3].

My direct and personal interaction with Ya.A. Smorodinsky started in 1963 when I came from Czechoslovakia to join his research team in Dubna and did my PhD work under his guidance. It lasted till 1968 when I returned to Prague and subsequently emigrated. By the time I arrived in Dubna Ya.A. had embraced the topic of symmetries in physics. He had just finished a very influential paper [4] in collaboration with the well known mathematician N.Ya. Vilenkin on the representation theory of the Lorentz group and its applications in relativistic

particle scattering theory. This article gave rise to several research programs that many theoretical and mathematical physicists all over the world (including myself) worked on and are still working on. The general theme is the study of the representation theory of compact and specially noncompact Lie groups in specific bases. Different bases for representations of the same group, e.g., the homogeneous Lorentz group O(3,1), are usually related to different chains of subgroups, both continuous and discrete ones. Very different special functions appear as basis functions in different bases. Different subgroup chains have different physical applications.

For instance, the O(3,1) D O(3), O(3,1) D D O(2,1), and O(3,1) d E(2) two-variable expansions incorporated partial-wave analysis, Regge-pole expansions and eikonal expansions, respectively [5, 6]. For further physical and mathematical developments of this theme see, e.g., [7—13]. Two-variable expansions were later generalized to the case of reactions involving four particles with arbitrary spins [14, 15] and applied to analyze distributions on Dalitz plots and nucleon—nucleon scattering data [16, 17]. The group-theoretical and special-function-theory aspects of this research program induced several lines of further mathematical research. One was a series of papers [18, 19] on basis functions for representations of O(p, q), SU(p, q), and other groups. Others are ongoing series of articles on classifying subgroups of Lie groups [20—24] and on the separation of variables in Hamilton— Jacobi and Laplace—Beltrami equations [4, 25—29]. The "method of trees" proposed by Vilenkin [30] and further developed by Ya.A. Smorodinsky and collaborators [8, 31] is now being applied in areas varying from nuclear physics to quantum groups [32]. It provides a graphical interpretation of different types of coordinates and of their relation to subgroups of isometry groups, or conformal groups of various homogeneous spaces [33, 34]. A very natural question

to ask is whether the basis functions arising in the representation theory of various Lie groups are related among each other. The answer is given by the theory of Lie group and Lie-algebra contractions [35]. Indeed, the use of "analytic contractions" has made it possible, for instance, to connect special functions related to "trees" on O(n) spheres and on O(n — 1,1) hyperboloids and to obtain new asymptotic formulas for these special functions [36].

The problem originally posed was to find all potentials in two and three dimensions that can be inserted into the Schrodinger or Hamilton—Jacobi equation and that would allow a "dynamical" symmetry group. A useful way of distinguishing between kinematical and dynamical symmetries for the Schrodinger equation was proposed. Namely, kinematical symmetries correspond to Lie point ones and are generated by sets of first-order differential operators, commuting with the Hamiltonian. Dynamical symmetries, on the other hand, are generated by sets of higher order operators, commuting with the Hamiltonian. They correspond to generalized symmetries, or Lie—Backhand symmetries, in the theory of differential equations. Second-order operators in quantum mechanics, or integrals of motion in classical mechanics that are quadratic in the momenta, turned out to be specially interesting. Indeed, Hamiltonians in n dimensions, allowing n commuting quadratic integrals of motion, will also allow the separation of variables in the Schrodinger and Hamilton—Jacobi equations. Such a Hamiltonian system will be integrable, both in the classical and in the quantum-mechanical sense. A further question that was posed was that of finding "superintegrable" systems with more than n integrals of motion.

In classical mechanics a system can have up to 2n — 1 functionally independent integrals of motion. In quantum mechanics the same is true, but the integrals are operators and independence must be more carefully defined. When articles [37—39] were written, only two superintegrable systems were known: the hydrogen atom (or the Kepler system) with its O(4) symmetry, discovered by Bargmann [42] and Fock [43], and the harmonic oscillator with its SU(3) symmetry [44, 45]. This very brief list was significantly extended in [37—40], where a complete classification of superintegrable systems with integrals of motion that are second order operators in the momenta was given for two- and three-dimensional Euclidean spaces.

For some recent reviews and new results in this area see, e.g., [46—55]. My contribution at this conference is devoted to the subject of superintegrability.

The influence of Yakov Abramovich on my life did not end when I left Dubna in 1968. Indeed, my emigration was facilitated by my association with him. Papers we had written together were known in the community and served as an excellent introduction for me. We interacted again personally during the last years of his life in 1990—1992 when he was finally able to travel and visited Montreal. At that time he was very interested in the new topic of quantum groups. We discussed a possible collaboration but unfortunately Yakov Abramovich passed away before this came to fruition.

There are many things that I learned from Yakov Abramovich in addition to theoretical and mathematical physics. I came to appreciate (and share) his opinion that mathematical physics must involve the use of "real" mathematics at the cutting edge of the discipline. On the other hand, he loved and practiced "real" phenomenology: the art of extracting the maximal possible information from well-performed and well-planned experiments. One conversation with Ya.A. that made a lasting impression on me was about the difference between the work of an accountant and that of a scientist. The work of an accountant is very useful the moment it is done and only then. The work of a scientist is supposed to have lasting value. The implication was that one should not try to "chase the mainstream" but should develop one's own scientific direction. If you are lucky, the mainstream will come to you.

In the case of Yakov Abramovich Smorodinsky it can certainly be said that his contribution to physics has stood up to the test of time. Much of his work is more appreciated now than when it was first published.