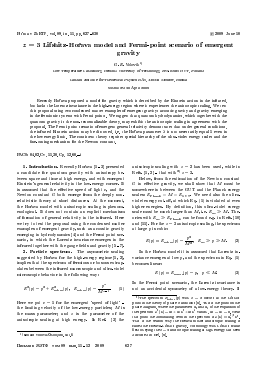 Recently Hofava proposed a model for gravity which is described by the Einstein action in the infrared, but lacks the Lorentz invariance in the high-energy region where it experiences the anisotropic scaling. We test this proposal using two condensed matter examples of emergent gravity: acoustic gravity and gravity emerging in the fermionic systems with Fermi points. We suggest that quantum hydrodynamics, which together with the quantum gravity is the non-renormalizable theory, may exhibit the anisotropic scaling in agreement with the proposal. The Fermi point scenario of emergent general relativity demonstrates that under general conditions, the infrared Einstein action may be distorted, i.e. the Hofava parameter A is not necessarily equal 1 even in the low energy limit. The consistent theory requires special hierarchy of the ultra-violet energy scales and the fine-tuning mechanism for the Newton constant.

1. Introduction. Recently Hofava [1-3] presented a candidate for quantum gravity with anisotropy between space and time at high energy, and with emergent Einstein's general relativity in the low-energy corner. It is assumed that the effective speed of light c, and the Newton constant G both emerge from the deeply non-relativistic theory at short distances. At the moment, the Hofava model with anisotropic scaling is phenom-enological. It does not contain an explicit mechanism of formation of general relativity in the infrared. Here we try to test the proposal using the condensed matter examples of emergent gravity, such as acoustic gravity emerging in hydrodynamics [4] and the Fermi point scenario, in which the Lorentz invariance emerges in the infrared together with the gauge fields and gravity [5-7].

2. Particle spectrum. The asymmetric scaling suggested by Hofava for the high-energy regime [1, 2], implies that the spectrum of fermions or bosons extrapolates between the infrared macroscopic and ultra-violet microscopic behavior in the following way:

Here we put c = 1 for the emergent 'speed of light' -the limiting velocity of the low-energy particles; M is the mass parameter; and z is the parameter of the anisotropic scaling at high energy. In Ref. [3] the

Below, from the estimation of the Newton constant G in effective gravity, we shall show that M must be somewhere in between the GUT and the Planck energy scales: -Epianck > M > .Egut- We need also the ultraviolet energy cut-off, at which Eq. (1) is violated at even higher energies. By definition, this ultra-violet energy scale must be much larger than M, i.e. Env M. Theories with Env .Epianck can be found e.g. in Refs. [10] and [11]. For the z = 3 anisotropic scaling, the spectrum at large p is cubic:

In the Hofava model it is assumed that Lorentz invariance emerges at low p, and the spectrum in Eq. (1) becomes linear:

In the Fermi point scenario, the Lorentz invariance is not an accidental symmetry of a low-energy theory. It

2)The spectrum -Emicro(p) with z = 2 occurs at the Lifshitz point in the theory of phase transitions [8]. This is the point on the phase diagram, where the parameters ao and ai of the expansion of the spectrum uj2(k) = ao + aik2 + <X2k4 vanish, ao = at = 0. Near this point the dominating term in the spectrum is ui(k) & a^2k2.

This is the reason why the Hofava model anisotropic scaling is

called the Hofava-Lifshitz gravity. Cosmology with Lifshitz scalar field obeying the z = 3 anisotropic scaling at high energy has been discussed in Ref. [91.

3. Lorentz symmetry violation. As follows from Eq.(3), the energy M is the scale at which the Lorentz invariance is violated. As we shall see below, the estimate of the Newton constant suggests that the Lorentz symmetry breaking scale M must be below or on the order of the Planck scale. Fortunately, for the z = 3 scaling this does not contradict to observations. This is because for z = 3, the Lorentz violating corrections to the linear spectrum at small p

start with the p5/ikf4 term. In the typical Lorentz violating models, including the Horava z = 2 scaling [3], the Lorentz violation starts with the natural p3/ikf2 term: E = p(l+p2/M2 + ...), see e.g. [13]. The p3/M2 term in spectrum with M of order of Planck scale and with the prefactor of order unity is strongly forbidden by observations: if M is of order of Planck scale or smaller, the prefactor must be smaller than 10-6 (see e.g. [14]). But the p5/ikf4 term is acceptable, which is one of the advantages of the z = 3 scaling.

The other advantage of the z = 3 scaling is the convergence of the integrals over momentum p in the ultraviolet limit. This is in particular because at large p the corrections to the cubic spectrum rapidly decay:

also non-renormalizable. It was suggested that in quantum hydrodynamics, the corrections to the linear spectrum of sound waves may also start with the k5 term: [16]

Here cs is the speed of sound, p is the mass density of a liquid and 7 is the factor of order unity.

The important property of this equation is that the quantum correction does not contain the 'speed of light' cs and is solely determined by the quantities which enter the commutation relations in quantum hydrodynamics: Planck constant % and mass density p (see Ref. [15]). This may give us a guiding principle for the spectrum in quantum hydrodynamics at high frequency: in the high-frequency regime the vortex-like degrees of freedom are dominating (whose quantum dynamics has been discussed in Ref. [IT]). The acoustic degrees of freedom are not relevant, the speed of sound cs drops out of equations and thus only p and % enter the spectrum. Based on this principle, it is possible to construct anisotropic scaling with different z. If one uses the dimensionality analysis only, then the high frequency spectrum which depends on p and % and does not depend on cs must be like that:

This matches Eq.(6) at low w, but corresponds to the anisotropic scaling with z = 5, rather than that with z = 3.

Alternatively, one may take into account the acoustic metric for phonons propagating in the liquid [4]. For the liquid at rest one has:

Then one can write the following equation for spectrum:

This equation has the correct covariant form at low frequency; does not contain cs explicitly (it is hidden in the metric); and matches the expansion in Eq.(6). But now it corresponds to the anisotropic scaling with z = 3 suggested by Horava for quantum gravity.

All this is highly speculative, since the full quantization of classical hydrodynamics has not yet been

constructed. That is why it is not clear whether it is reasonable to apply the above guiding principle to quantum gravity. One may suggest for example that in the high-frequency regime the emergent speed of light c is dropped out of equations and the spectrum may depend only on the energy density of the vacuum e. Then the dimensionality analysis gives the inverse cubic spectrum for large momentum, EmjCI0(p) oc eh3p^3. This might be reasonable, since it is consistent with the estimate of the energy density of the vacuum: e oc oc f d3p/(2Trti)3 -^micro(p)'

5. Newton constant in Fermi point scenario. In the Fermi point scenario, the 3+1 gravity emerges at small p together with gauge fields [6, 7] (the 2+1 gravity emerging in the vicinity of the Dirac point in graphene is discussed e.g. in Ref. [18]). The action for effective gravity and effective gauge fields is obtained by integration over fermions in the same manner as in Sakharov induced gravity [19] and Zeldovich induced gauge field [20]. Let us start with gravity and show that the scale ikf in the spectrum (1) for the z = 3 anisotropic scaling is on the order of or even below the Planck energy scale

The gravitational coupling can be estimated using the Sakharov approach in which the action for gravity is obtained by integration over quantum fluctuations [19]. The natural regularization in the Sakharov equation for the Newton constant, 1/G ~ f leads to 1/G ~ ikf2ln(.E2v/ikf2). We illustrate this using two different ways of regularization. In the first illustration, we substitute p in