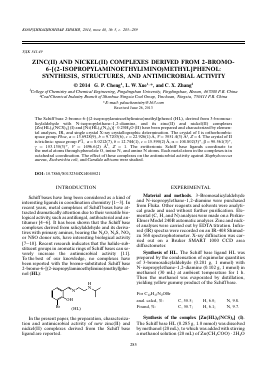 Schiff bases have long been considered as a kind of interesting ligands in coordination chemistry [1—3]. In recent years, metal complexes of Schiff bases have attracted dramatically attention due to their versatile biological activity, such as antifungal, antibacterial and antitumor [4—6]. It has been shown that the Schiff base complexes derived from salicylaldehyde and its derivatives with primary amines, bearing the N2O, N2S, NO2 or NSO donor sets, have interesting biological activity [7—10]. Recent research indicates that the halide-sub-stituent groups in aromatic rings of Schiff bases can severely increase the antimicrobial activity [11]. To the best of our knowledge, no complexes have been reported with the bromo-substituted Schiff base 2-bromo-6-[(2-isopropylaminoethylimino)methyl]phe-nol (HL):

In the present paper, the preparation, characterization and antimicrobial activity of new zinc(II) and nickel(II) complexes derived from the Schiff base ligand are reported.

Material and methods. 3-Bromosalicylaldehyde and N-isopropylethane-1,2-diamine were purchased from Fluka. Other reagents and solvents were analytical grade and used without further purification. Elemental (C, H, and N) analyses were made on a Perkin-Elmer Model 240B automatic analyser. Zinc and nickel analyses were carried out by EDTA titration. Infrared (IR) spectra were recorded on an IR-408 Shimad-zu 568 spectrophotometer. X-ray diffraction was carried out on a Bruker SMART 1000 CCD area diffractometer.

Synthesis of HL. The Schiff base ligand HL was prepared by the condensation of equimolar quantities of 3-bromosalicylaldehyde (0.201 g, 1 mmol) with N-isopropylethane-1,2-diamine (0.102 g, 1 mmol) in methanol (30 mL) at ambient temperature for 1 h. Then the methanol was evaporated by distillation, yielding yellow gummy product of the Schiff base.

(0.219 g, 1.0 mmol). The mixture was stirred for 1 h at ambient temperature to give a colorless solution. Colorless block-shaped single crystals suitable for X-ray diffraction were formed by slow evaporation of the solution in air for several days. The yield was 38% (based on HL).

X-ray diffraction. Data were collected from selected crystals mounted on glass fibers. The data for the two complexes were processed with SAINT [12] and corrected for absorption using SADABS [13]. Multiscan absorption corrections were applied with y-scans [14]. The structures were solved by direct methods using the program SHELXS-97 and refined by full-matrix least-squares techniques on F2 using anisotropic displacement parameters [15]. The amino hydrogen atoms in I were located from a difference Fourier map and refined isotropically, with N—H and H—H distances restrained to 0.90(1) and 1.43(2) A, respectively. The remaining hydrogen atoms were placed at the calculated positions. Idealized H atoms were refined with isotropic displacement parameters set to 1.2 (1.5 for methyl groups) times the equivalent isotropic U values of the parent carbon and nitrogen atoms. The crystallo-graphic data for the complexes are listed Table 1.

Supplementary material has been deposited with the Cambridge Crystallographic Data Centre (nos. 945894 (I) and 945895 (II); deposit@ccdc.cam. ac.uk or http://www.ccdc.cam.ac.uk).

The Schiff base HL was prepared by the condensation of equimolar quantities of 3-bromosalicylalde-hyde with N-isopropylethane-1,2-diamine in methanol at ambient temperature [10]. The Schiff base prepared in this way is formed in nearly quantitative yield and of high purity. The complexes were readily synthesized by reaction of the Schiff base and metal salts in methanol at ambient temperature. All the compounds are very stable at room temperature in the solid state and soluble in common organic solvents, such as methanol, ethanol, chloroform, and acetonitrile. The results of the elemental analyses are in accord with the composition suggested for the ligand and the complexes.

The molecular structures of complexes I and II are shown in figure. Selected bond distances and angles are listed in Table 2. The complexes are structurally similar centrosymmetric mononuclear compounds, with the metal atoms lying on the inversion centers. Complex I has only one complex molecule, while the asymmetric unit of complex II contains two complex molecules and one quarter disordered water molecule. Each metal atom in the complexes is coordinated by two phenolate O and two imine N atoms from two zwitterionic Schiff base ligands, defining the equatorial plane, and by two N atoms from two pseudohalide ligands (NCS for I and N3 for II), occupying the two axial positions, generating an octahedral geometry. The Schiff base ligand acts as a zwitterionic tridentate ligand, forming one six-membered chelate ring with the metal center. The amino group of the Schiff base ligand is protonated, which form a hydrogen bond with the phenolate O atom of adjacent Schiff base ligand. The two axial bonds are much longer than the basal bonds, which is caused by the Jahn-Teller effects. The bond distances subtended at the metal atoms are comparable to those observed in similar zinc(II) and nickel(II) complexes with Schiff bases [16-20].

Qualitative determination of antimicrobial activity was done using the disk diffusion method [21, 22]. The results are summarized in Table 3. A comparative study of minimum inhibitory concentration (MIC) values of the Schiff base and the complexes indicate that the two complexes have more effective activity than the free Schiff base. Generally, this is caused by the greater lipophilic nature of the complexes than the ligand. Such increased activity of the metal chelates can be explained on the basis of chelating theory [23]. On chelating, the polarity of the metal atoms will be reduced to a greater extent due to the overlap of the ligand orbital and partial sharing of positive charge of

Table 1. Crystallographic data and experimental details for I and II