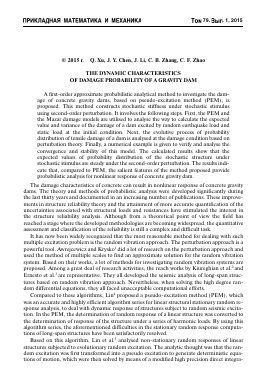 THE DYNAMIC CHARACTERISTICS OF DAMAGE PROBABILITY OF A GRAVITY DAM

A first-order approximate probabilistic analytical method to investigate the damage of concrete gravity dams, based on pseudo-excitation method (PEM), is proposed. This method constructs stochastic stiffness under stochastic stimulus using second-order perturbation. It involves the following steps. First, the PEM and the Mazar damage models are utilised to analyse the way to calculate the expected value and variance of the damage of a dam excited by random earthquake load and static load at the initial condition. Next, the evolutive process of probability distribution of tensile damage of a dam is analysed at the damage condition based on perturbation theory. Finally, a numerical example is given to verify and analyse the convergence and stability of this model. The calculated results show that the expected values of probability distribution of the stochastic structure under stochastic stimulus are steady under the second-order perturbation. The results indicate that, compared to PEM, the salient features of the method proposed provide probabilistic analysis for nonlinear response of concrete gravity dam.

The damage characteristics of concrete can result in nonlinear response of concrete gravity dams. The theory and methods of probabilistic analysis were developed significantly during the last thirty years and documented in an increasing number of publications. These improvements in structure reliability theory and the attainment of more accurate quantification of the uncertainties associated with structural loads and resistances have stimulated the interest in the structure reliability analysis. Although from a theoretical point of view the field has reached a stage where the developed methodologies are becoming widespread, the quantitative assessment and classification of the reliability is still a complex and difficult task.

Based on this algorithm, Lin et al.5 analysed non-stationary random responses of linear structures subjected to evolutionary random excitation. The analytic thought was that the random excitation was first transformed into a pseudo excitation to generate deterministic equations of motion, which were then solved by means of a modified high precision direct integra-

tion method. Furthermore, Lin et al.6 developed the inverse PEM for dealing with loading identifcation problems. Then, Lin et al.7 utilized this algorithm to perform probabilistic analysis for long-span structures such as long-span bridges8,non-uniform beams9 and so on. Other researchers carried out a rigorous series of algorithms in order to improve and develop PEM. Xu et al.10 presented a new algorithm for buffeting analysis of long-span bridges, featured mainly by a complete finite element approach and the PEM and then used this algorithm to perform fully coupled buffeting analysis of Tsing Ma suspension bridge11 and vibration analysis of wind-excited structures12. Then, based on the PEM, Xu et al.13,14 and Zhang et al.15 also presented closed-form solution for seismic response of adjacent buildings connected by hydraulic actuators with linear quadratic Gaussian controllers. Based on the PEM, Sun et al.16 presented a formulation for fully coupled buffeting analysis of long-span cable-supported bridges, in which dynamic coupling between vibration modes, dynamic forces on bridge deck and towers and cables, and varying wind speed and structural properties along the bridge deck and towers and cables can be taken into consideration. Li et al.17 utilized PEM for the random vibration analysis of seismic responses of tall buildings. Xue et al.18 utilized the PEM to make a random vibration study of structures under multi-component seismic excitations. Li et al.19 extended the PEM with the stochastic orthogonal polynomial expansion method to make response analysis of stochastic parameter structures under non-stationary random excitation. Nevertheless, the PEM only was utilised to analyse linear structures because it was based on superposition principle.

Because of nonlinear damage behaviour of concrete gravity dams, the PEM need to be extended to analysing nonlinear system.

1. Brief introduction on pseudo-excitation method. At time t s T, autocorrelation function of stationary random process x(t) is given by

where E(#) is the expected value of variable #.

2 2 where Exx and Dxx are the expected value and variance of x(t). When Exx = 0, Dxx can be determined from Sxx(f).

The PEM is the numerical method to find Sxx(f), and the basic principle of this method is shown in Fig. 1.

The response power spectrum of the linear system under single-point and stationary random excitation x(t) is given by the relation (see Fig. 1, a)

The meaning of the frequency response function H = H(ro) is given in Fig. 1, b. When the harmonic excitation e'mt of single-point affects the linear system, the corresponding response y = He"*'. It is worth noting that pseudo excitation is given by

The response can also be multiplied by the same constant <JSxx (see Fig. 1, c). Still using E to represent the corresponding pseudo response of a variable, it could be seen from Fig. 1, c that

The asterisk marks the complex conjugate.

When considering two pseudo responses yx and y2 (Fig. 1, d), it could be seen that

The aforementioned analysis reveals that

Thus, it can be obtained that

where f, ct and s are the internal force, stress and strain, respectively.

2. The establishment of probabilistic analytical model for damage at initial condition. Here, all random variables are assumed to obey Gaussian distribution.

When the dam is excited by static and random seismic load, the element's strain of the dam is a random variable. From static analysis of the dam, the initial expected value E(sk) of strain

The vibration equation of a gravity dam can be written as

where V, V and Vare the acceleration, velocity and displacement of nodes in the dam model, K, C and M are the stiffness matrix, damping matrix and mass matrix in the dam model, and F(t) is the random seismic load.

Equation (2.1) reveals that gravity dam under random seismic load is a linear system. Accordingly, the PEM can be utilised.

The pseudo excitation is constructed as

where F(t) and S(rn) are the pseudo excitation and the power spectrum density of random seismic load.

By the PEM, the initial power spectrum density of strain of the element k is given by

where s k is the pseudo strain response of the element k.

Thus, the initial variance of strain of the element k is given by

The Mazar damage model, which is only related to strain as a damage constitutive equation, is a widely used isotropic damage model for concrete20, 21 because this model is simple to compute. And the value of damage indicates elasticity modulus reduction proportion. This model is utilized here to describe the tension damage of the element k as

It is worth noting that sk and QTk are vectors with components in x and y directions.

In initial step, the element's strain is assumed to obey normal distribution, based on this physically motivated hypothesis, the expected value of tension damage of the element k can be determined using expression (2.5) as