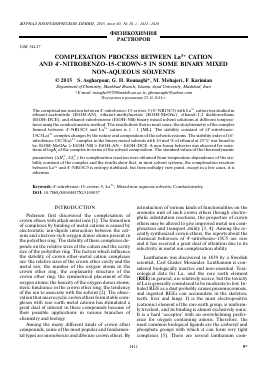 The complexation reaction between 4'-nitrobenzo-15-crown-5 (4'-NB15C5) with La3+ cation was studied in ethanol-acetonitrile (EtOH-AN), ethanol-methylacetate (EtOH-MeOAc), ethanol-1,2 dichloroethane (EtOH-DCE), and ethanol-nitrobenzene (EtOH-NB) binary mixed solvent solutions at different temperatures using the conductometric method. The results show that in most cases, the stoichiometry of the complex formed between 4'-NB15C5 and La3+ cation is 1 : 1 [ML]. The stability constant of (4'-nitrobenzo-15C5La)3+ complex changes by the nature and composition of the solvents systems. The stability order of (4'-nitrobenzo-15C5La)3+ complex in the binary mixed solvents with 10 mol % of ethanol at 25°C was found to be: EtOH-MeOAc > EtOH-NB > EtOH-AN ~ EtOH-DCE. A non-linear behavior was observed for variations of logtff of the complex in terms of the solvent composition. The standard values of the thermodynamic

Among the many different kinds of crown ether compounds, some of the most popular and fundamental types are monobenzo and dibenzo crown ethers. By

introduction of various kinds of functionalities on the aromatic unit of such crown ethers through electro-philic substitution reactions, the properties of crown ethers may be altered to give improved metal ion complexation and transport ability [3, 4]. Among the recently synthesized crown ethers, the reports about the chemical behaviors of 4'-nitrobenzo-15C5 are rare and it has received a great deal of attention due to its selectivity in metal ion complexation ability.

Lanthanum was discovered in 1839 by a Swedish scientist, Carl Gustav Mosander. Lanthanum is considered biologically inactive and non-essential. Toxi-cological data for La, and the rare earth element (REE) in general, are relatively scarce, but the toxicity of La is generally considered to be moderate to low. Inhaled REE as a dust probably causes pneumoconiosis, and ingested REEs can accumulate in the skeleton, teeth, liver and lungs. It is the most electropositive (cationic) element of the rare earth group, is uniformly trivalent, and its binding is almost exclusively ionic. It is a hard 'acceptor' with an overwhelming preference for oxygen containing anions. Therefore, the most common biological ligands are the carboxyl and phosphate groups with which it can form very tight complexes [5]. There are several lanthanum com-

pounds that are available commercially. These include oxide, carbonate, chloride and fluoride. Among these compounds, lanthanum carbonate has been used in the medical industry for preparing a pharmaceutical drug. Fosrenol (La2(CO3)3), the FDA (US Food and Drug Administration) approved drug, is used as a phosphate binding agent for patients with hyper phos-phataemia. Another application of lanthanum is found to be in water treatment, for removing oxyan-ions, such as phosphate and arsenate.

From the soil, lanthanides are transported to lakes, rivers and ground water and consequently to the plants growing in the area, animals and humans, where their different amounts are accumulated in different tissues. It has been found that in the human organism, higher amounts of lanthanides accumulate in cancer cells than in healthy ones, which may mean that lanthanides could be used in diagnosing cancer and its treatment. Studies on eliminating of lanthanides from animal organisms has been studied using strong com-plexing agents such as N-Phosphonomethyl glycine. The effect of lanthanides on cultivated plants and fruit trees has also been investigated. The results show that the presence of lanthanides in plant tissues increases absorption of nitrogen, phosphorus and potassium, thus accelerating the process of ripening of plants and increasing the growth of their mass; the color of the vegetables and fruit is more intense, their taste is better and their nutritive value higher. The positive effect of lanthanides on plants has given rise to increasing interest in studies on their use as a supplement to artificial fertilizers [6]. Because of the increasing interest in bio-inorganic and coordination chemistry, as well as, in the increased industrial use of lanthanum compounds and their enhanced discharge, toxic properties and other adverse effects, the study of complexation process of the La3+ cation with the macrocyclic ligands such as crown ehters is important.

In the present work, we studied the complex formation between the La3+ cation and the macrocyclic ligand, 4'-NB15C5, in pure EtOH, AN, MeOAc, and DCE and also in EtOH-AN, EtOH-MeOAc, EtOH-DCE and EtOH-NB binary solvent systems at various temperatures using the conductometric method. The effects of the solvent properties on the stability, stoichiometry, and also the thermodynamics of the complexation process between La3+ and 4'-nitrobenzo-15C5 are discussed in this paper.

The analytical-grade, 4'-NB15C5 and lantha-num(III) nitrate (with highest purity, >99%) were purchased from Merck Company and were used without any further purification except for vacuum drying. The solvents: acetonitrile, 1,2-dichloroethane, ethanol, methylacetate and nitrobenzene, all from Merck, were

The conductance measurements were performed using a digital, WTW conductivity apparatus model LF2000 in a water bath thermostated with a constant temperature within ±0.03°C. The electrolytic conductance was measured using a cell consisting of two platinum electrodes to which an alternating potential was applied. A conductometric cell with a cell constant of 0.958 cm-1 was used throughout the studies.

In order to study the complexation process between 4'-NB15C5 and La3+, 20 mL of the metal salt solution (5 x 10-4 M) was placed in titration cell. The conductance of the solution was measured at each fixed temperature. Then, a known amount of the macrocycle solution prepared in the same solvent (2 x 10-2 M), was added in a stepwise manner using a pre-calibrated microburette. The conductances of the solutions were measured at the equilibrium temperature. This procedure was continued until the total concentration of the ligand was approximately five times higher than that of the metal cation. The conductance of the solution was measured after each addition, and the data were used for the calculation of the stability constant of the 1 : 1 [ML] complex in various solvent systems.

The changes of the molar conductivity (Am) versus the ligand to cation molar ratio ([L]t/[M]t) for complexation of 4'-nitrobenzo-15C5 with La3+ cation was measured in pure AN, EtOH, DCE and MeOAc, and also in their binary solvent solutions at various temperatures. [L]t is the total concentration of the ligand and [M]t is the total concentration of the metal cation. Two typical examples of molar conductance—mole ratio plots for the complex which was formed between 4'-ni-trobenzo-15C5 and La3+ cation in two different solvent systems at various temperatures are shown in Figures 1 and 2.

Investigation of the molar conductivity plots for formation of (4'-nitrobenzo-15C5La)3+ complex shows that the slope of molar conductivity curves at different temperatures changes sharply up to the point that the ligand to cation mole ratio is about 1 which is an evidence for formation of a 1 : 1 [M : L] complex between the La3+ cation and the macrocyclic ligand. In order to make more clear the 1 : 1 [M : L] complex-ation model, the fitting and experimental curves for (4'-nitrobenzo-15C5La)3+ complex in EtOH-DCE (mol % EtOH = 25%) at 298.15 K is shown in Fig. 3. As is evident in this Figure, there is a very good agreement between the fitting and experimental data.