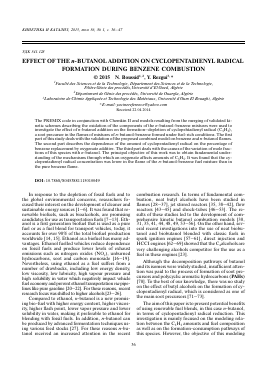 The PREMIX code in conjunction with Chemkin II and models resulting from the merging of validated kinetic schemes describing the oxidation of the components of the n-butanol-benzene mixtures were used to investigate the effect of n-butanol addition on the formation—depletion of cyclopehtadienyl radical (C5H5), a soot precursor in the flames of mixtures of n-butanol-benzene formed under fuel-rich conditions. The first part of this study deals with the validation of the proposed combined model on benzene and n-butanol flames. The second part describes the dependence of the amount of cyclopentadienyl radical on the percentage of benzene replacement by oxygenate additive. The third part deals with the causes of the variation of mole fractions of this species with n-butanol. The principal objective of this work was to obtain fundamental understanding of the mechanisms through which an oxygenate affects amounts of C5H5. It was found that the cy-clopentadienyl radical concentration was lower in the flame of the n-butanol-benzene fuel mixture than in the pure benzene flame.

In response to the depletion of fossil fuels and to the global environmental concerns, researchers focused their interest on the development of cleaner and sustainable energy sources [1—6]. It was found that renewable biofuels, such as bioalcohols, are promising candidates for use as transportation fuels [7—13]. Eth-anol is a first generation biofuel that is used as a pure fuel or as a fuel blend for transport vehicles, today, it accounts for over 90% of the total biofuel production worldwide [14, 15]. Ethanol as a biofuel has many advantages. Ethanol fuelled vehicles reduce dependence on fossil fuels and produce lower levels of exhaust emissions such as nitrogen oxides (NOx), unburned hydrocarbons, soot and carbon monoxide [16—19]. Nevertheless, using ethanol as a fuel suffers from a number of drawbacks, including low energy density, low viscosity, low lubricity, high vapour pressure and high solubility in water which negatively impact vehicle fuel economy and prevent ethanol transportation via pipelines like pure gasoline [20—22]. For these reasons, recent research focus was shifted to higher alcohols [23—26].

Compared to ethanol, «-butanol is a new promising bio-fuel with higher energy content, higher viscosity, higher flash point, lower vapor pressure and lower solubility in water, making it preferable to ethanol for blending with fossil fuels. In addition, «-butanol can be produced by advanced fermentation techniques using various feed stocks [27]. For these reasons «-bu-tanol received an increased attention in the recent

combustion research. In terms of fundamental combustion, neat butyl alcohols have been studied in flames [28—37], jet stirred reactors [35, 38—42], flow reactors [43—45] and shock-tubes [46—53]. The results of these studies led to the development of comprehensive kinetic butanol combustion models [30, 31, 35, 41, 44, 48, 49, 53-56]. On the other hand, several recent investigations into the use of neat biobu-tanol and biobutanol blended with classic fuels in spark ignition engines [57-61], direct injection and HCCI engines [62-69] showed that the C4alcohols are very challenging alcohols competitor for the use as a fuel in these engines [23].

Although the decomposition pathways of butanol and its isomers were widely studied, insufficient attention was paid to the process of formation of soot precursors and polycyclic aromatic hydrocarbons (PAHs) [70]. To the best of our knowledge, there was no study on the effect of butyl alcohols on the formation of cy-clopentadienyl radical, which is considered as one of the main soot precursors [71-73].

The aim of this paper is to present potential benefits of using renewable fuel blends, in this case «-butanol, in terms of cyclopentadienyl radical reduction. This investigation is mainly focused on the modeling relation between the C5H5 amounts and fuel composition as well as on the formation-consumption pathways of this species. However, the objective of this modeling

study was the analysis of the reaction pathways involved in the formation—depletion of cyclopentadie-nyl radical rather than a theoretical reproduction of the experimental data.

The reduction of the polycyclic aromatic hydrocarbons (PAHs) and soot formation in flames is a primary focus of current combustion researches because of the potency of some of the PAH isomers in inducing mutations and cancer [71, 74—76]. These heavy and stable compounds, particularly benzo[a]pyrene, are metabolized by human body to high electrophilic chemical species (epoxies), which tend to disturb cellular division through their addition on proteins and DNA [77, 78].

PAH growth models generally agree that the formation of PAHs starts from an aromatic species, a benzene molecule or a phenyl radical [79]. It is generally believed that, under fuel-rich conditions, the PAHs are formed by sequential activation of neighboring aromatic sites by hydrogen atom abstraction, followed by multiple additions of the aryl radical to acetylene molecules, and cyclization to the next higher order ring (HACA mechanism) [80, 81]. However, this model falls short in predicting many of the experimental observations [82] and it appeared that new reaction mechanisms for PAH formation must be invoked. Melius et al. proposed that in aliphatic hydrocarbon flames, the larger aromatics originate from resonance-stabilized cyclopentadienyl radicals (C5H5) and postulated a radical-radical mechanism that describes the naphthalene formation from two C5H5 radicals [71]. Mullholland et al. studied the PAH formation and growth and confirmed that higher aromatic compounds could be formed via a radical-molecule mechanism in which cyclopentadienyl radical plays a crucial role [83]. The importance of this latter pathway and the cyclopentadienyl moities in the growth of the PAH compounds was also reported by Violi et al. [84, 85]. All the proposed mechanisms assume that the formation of the first aromatic ring was the rate-limiting step in the formation of polyaromatic hydrocarbons and soot. Accordingly, much attention was given to this process [86, 87].

Due to the pertinent role of C6H6 and C5H5 in forming aromatics and PAHs, these species were selected in the present work.

Finally, Detilleux and Vandooren suggested the analysis of one-dimensional laminar premixed low-pressure benzene flame structures as an attractive way to investigate PAH formation pathways, in which the first aromatic ring does not need to be formed. Thus, avoiding the uncertainties associated with the formation of the first ring [77] and taking this suggestion into account, the C6H6 was chosen as a reactant model.

All the simulations have been performed using the PREMIX code for modeling premixed laminar stabilized flames [88]. The program input includes forward reaction rates and thermodynamic polynomials for all of the participating species in addition to temperature profile, pressure, mass flow rate through the burner and concentrations of the reactants.

The global gas phase chemical kinetic mechanism, used to describe pyrolysis and oxidation of the ben-zene-butanol mixtures, was built up based on the recent kinetics literature for benzene, butanol, and a baseline of small hydrocarbon species. The mechanism of Richter and Howard (Rich), elaborated especially for the description of the benzene combustion and oxidation [89], was taken as the base mechanism. To model the K-butanol combustion, additional reactions were added to the core mechanism from the model of Sarathy et al. (Sar), proposed especially for the description of the butyl alcohols combustion and oxidation [56]. Hydrogen abstraction and monomo-lecular decomposition, as well as reactions of the resulting products that eventually produced species present in the benzene mechanism were the selected reactions from the alcohol kinetic scheme.

The model of Richter and Howard was assessed against experimental data issued from studies conducted in four one-dimensional laminar premixed low-pressure ethylene, acetylene, and benzene flames at equivalence ratios (O) of 0.75 and 1.9 (C2H4) [90, 91], 2.4 (C2H2) [92], and 1.8 (C6H6) [93, 94]. As indicated by the authors, the mechanism successfully reproduces the formation of the main combustion products, and the formation and depletion of major intermediates including radicals. Richter's model includes reactions subsets of species up to C16H10 and consists of 157 chemical species and 872 reactions. This reaction mechanism is provided for low-pressure and atmospheric pressure conditions and takes into account the pressure dependence of chemically activated reactions.