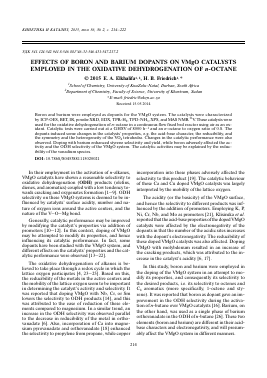 Boron and barium were employed as dopants for the VMgO system. The catalysts were characterized by ICP-OES, BET, IR, powder XRD, EDX, TPR-H2, TPD-NH3, XPS, and MAS NMR 51V These catalysts were used for the oxidative dehydrogenation of n-octane in a continuous flow fixed bed reactor using air as an oxidant. Catalytic tests were carried out at a GHSV of 8000 h-1 and an n-octane to oxygen ratio of 0.8. The dopants induced some changes in the catalysts' properties, e.g. the acid-base character, the reducibility, and the symmetry and the heterogeneity of the VO4 tetrahedra. Changes in the catalytic performance were also observed. Doping with barium enhanced styrene selectivity and yield, while boron adversely affected the activity and the ODH selectivity of the VMgO system. The catalytic activities may be explained by the reduc-ibility of the vanadium species.

In their employment in the activation of «-alkanes, VMgO catalysts have shown a reasonable selectivity to oxidative dehydrogenation (ODH) products (olefins, dienes, and aromatics) coupled with a low tendency towards cracking and oxygenates formation [1—9]. ODH selectivity on these VMgO systems is deemed to be influenced by catalysts' surface acidity, number and nature of oxygen ions around the active centers, and the nature of the V—O—Mg bond.

The oxidative dehydrogenation of alkanes is believed to take place through a redox cycle in which the lattice oxygen participates [4, 23—25]. Based on this, the reducibility of the metals in the active centers and the mobility of the lattice oxygen seem to be important in determining the catalyst's activity and selectivity. It was reported that doping VMgO with Nb, Cr, or Sm lowers the selectivity to ODH products [14], and this was attributed to the ease of reduction of these elements compared to magnesium. In a similar trend, an increase in the ODH selectivity was observed parallel to the decrease in reducibility of the metal in ortho-vanadate [6]. Also, incorporation of Ca into magnesium pyrovanadate and orthovanadate [18] enhanced the selectivity to propylene from propane, while copper

incorporation into these phases adversely affected the selectivity to this product [19]. The catalytic behaviour of these Ca and Cu doped VMgO catalysts was largely interpreted by the mobility of the lattice oxygen.

The acidity (or the basicity) of the VMgO surface, and hence the selectivity to different products was influenced by the addition of promoters. Employing K, P, Ni, Cr, Nb, and Mo as promoters [21], Klisinska et al. reported that the acid-base properties ofthe doped VMgO catalysts were affected by the electronegativity of the dopants in that the number of the acidic sites increases with the dopant's electronegativity. The reducibility of these doped VMgO catalysts was also affected. Doping VMgO with molybdenum resulted in an increase of the cracking products, which was attributed to the increase in the catalyst's acidity [6, 17].

In this study, boron and barium were employed in the doping of the VMgO system in an attempt to modify its properties, and consequently its selectivity to the desired products, i.e. its selectivity to octenes and C8 aromatics (more specifically, 1-octene and styrene). It was reported that boron as dopant gave an improvement in the ODH selectivity during the activation of«-butane over VMgO catalysts [16]. Barium, on the other hand, was used as a single phase of barium orthovanadate in the ODH of «-butane [26]. These two elements (boron and barium) are different in their acid-base characters and electronegativity, and will presumably affect the VMgO system in different manners.

All the catalysts were synthesizes by the wet impregnation method. The synthesis of the undoped VMgO is discussed elsewhere [8]. For the preparation of the boron-doped catalyst (BVMgO), a clear hot aqueous solution (700 mL) that contains 1.2244 g of ammonium metavanadate was added to magnesium oxide (5.5302 g) that was prepared by the procedure outlined in [8]. Prior to its usage in the synthesis, the exact amount of Mg in this synthesized MgO was determined using ICP-OES. The resultant solution was heated and magnetically stirred at 80°C. After half an hour, 100 mL of a hot aqueous solution that contained 0.2490 g of boric acid was added to the hot solution that contained the vanadium and magnesium. Heating and stirring were continued until a paste was formed (5 h). The paste was then placed overnight in an oven at 110°C. The catalyst so-obtained (BVMgO) was ground, thoroughly mixed, and calcined at 550°C for 5 h. The temperature ramping during the calcinations was 1.5°C/min until 550°C was reached. Thereafter, the calcined catalyst was pellitized, crushed, and sieved to a 600—1000 ^m mesh size. The same procedure was followed for the synthesis of the barium-doped catalyst (BaVMgO). The notable difference, however, was that 200 mL of a hot aqueous solution of barium (barium carbonate) was used, and more washing was needed to transfer the barium to the solution that contains vanadium and magnesium.

The BET surface areas and porosity (pore volume) were measured by nitrogen physisorption isotherms on a Micromeritics Gemini instrument. Prior to the analysis samples were degassed in a stream of nitrogen at 200°C for 24 h.

Powder X-ray diffraction patterns were recorded on a Philips PW1050 diffractometer equipped with a graphite monochromator and operated at 40 kV and 40 mA. The source of radiation was CoKa. The 29 covers the range between 10 and 70 degrees at a speed of one degree per minute with a step size of 0.02 degrees and all data were captured by a Sietronics 122D automated microprocessor. Employing the peak at 50°, the average crystallite sizes were calculated using the Scherrer equation. The instrumental broadening on this peak was accounted for by running a standard (quartz powder) at about the same 29.

X-ray photoelectron spectroscopy (XPS) was carried out on a Thermo Scientific Multilab 2000 instrument by employing AlKa radiation (1486.6 eV) and considering the C1s spectra as the reference (284.5 eV) for all binding energies.

Temperature-programmed reduction (TPR) experiments were conducted using a Micromeritics 2900 AutoChem II Chemisorption Analyzer. Prior to the reduction, the catalyst was pretreated by heating under a stream of argon (30 mL/min) at 400°C for 30 min and then cooled down to 80°C under the same flow of argon. In the reduction experiment, 5% H2 in argon was used as a reducing agent at a flow rate of 50 mL/min. Under these reducing conditions, the temperature was ramped up to 950°C at a rate of 10°C/min. To investigate the resultant phase(s) of this reduction, powder XRD was carried out on catalyst samples after being reduced.

Temperature-programmed desorption (TPD) experiments were carried out using a Micromeritics 2900 AutoChem II Chemisorption Analyzer. The catalyst (ca. 20 mg) was first flushed at 350°C with helium flowing at 20 mL/min for 30 min and the temperature was thereafter brought down to 80°C. A 4.1% ammonia in helium gas mixture was then passed (20 mL/min) over the catalyst for 30 min. The excess ammonia was removed by flushing the system with helium (30 mL/min) for 30 min. The adsorbed ammonia was then stripped off by the same stream of helium (30 mL/min) and a temperature ramp of up to 900°C (at 10°C/min), and the desorption profiles were recorded.

The magic angle spinning nuclear magnetic resonance (MAS NMR) 51V spectra were recorded at 600 MHz on a Bruker Avance III 600 NMR Spectrometer fitted with a Bruker Solid State Probe. A cylindrical zirconia rotor, which contains the packed catalyst sample, was rotated at a speed of 12 kHz during the data acquisition. A pulse length of 2.5 ^s and a pulse delay of 1 s were used.

The catalytic testing was carried out in a fixed bed continuous flow reactor that operated in a down flow mode. The reactor tube was stainless steel (220 mm in length and 10 mm in internal diameter). The catalyst volume was 1 mL (ca. 0.45 g) and the catalyst pellets sizes were between 600 and 1000 ^m. Air was used as an oxidant and nitrogen as a make-up gas to give the required total flow. Before conducting any catalytic experiment, the air and nitrogen flow rates were set to the desired values using air and nitrogen rotameters, respectively, and the flow of each gas was further re-