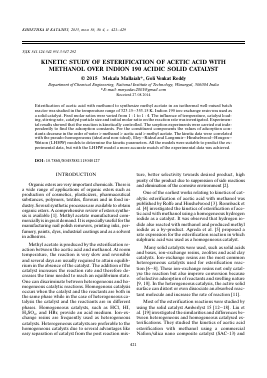 Esterification of acetic acid with methanol to synthesize methyl acetate in an isothermal well-mixed batch reactor was studied in the temperature range of 323.15—353.15 K. Indion 190 ion-exchange resin was used as a solid catalyst. Feed molar ratios were varied from 1 : 1 to 1 : 4. The influence of temperature, catalyst loading, stirring rate, catalyst particle size and initial molar ratio on the reaction rate was investigated. Experimental results showed that the reaction is kinetically controlled. The sorption experiments were carried out independently to find the adsorption constants. For the constituent components the values of adsorption constants decrease in the order of water > methanol > acetic acid > methyl acetate. The kinetic data were correlated with the pseudo-homogeneous (ideal and non-ideal), Eley—Rideal and Langmuir—Hinshelwood—Hougen— Watson (LHHW) models to determine the kinetic parameters. All the models were suitable to predict the experimental data, but with the LHHW model a more accurate match of the experimental data was achieved.

Organic esters are very important chemicals. There is a wide range of applications of organic esters such as production of cosmetics, plasticizers, pharmaceutical substances, polymers, textiles, flavours and in food industry. Several synthetic processes are available to obtain organic esters. A comprehensive review of esters synthesis is available [1]. Methyl acetate manufactured commercially is in great demand. It is especially useful for the manufacturing nail polish removers, printing inks, perfumery, paints, dyes, industrial coatings and as a solvent in adhesives.

ture, better selectivity towards desired product, high purity of the product due to suppression of side reactions and elimination of the corrosive environment [2].

Most of the esterification reactions were studied by using the solid catalyst Amberlyst 15 [12—18]. Liu et al. [19] investigated the similarities and differences between heterogeneous and homogeneous catalysed es-terifications. They studied the kinetics of acetic acid esterification with methanol using a commercial Nafion/silica nano composite catalyst (SAC-13) and

H2SO4. The kinetic behaviour of esterification of acetic acid with methanol was investigated by Tsai et al. [20], who used Amberlyst 36 as a solid catalyst in a packed-bed reactor in the temperature range of 313.15—328.15 K with the molar ratio of methanol to acetic acid varied from 1 to 5.

In the present work, esterification of acetic acid with methanol was studied in the presence of the solid acid catalyst Indion 190. This catalyst has received little attention. For the first time adsorption of acetic acid, methanol, methyl acetate, and water on Indion 190 catalyst surface from binary mixtures was conducted. For the first time the swelling of Indion 190 catalyst in the presence of acetic acid, methanol, methyl acetate and water could be described. Moreover, in the present study ideal and non-ideal based kinetic models were used to correlate the experimental data. The effect of various parameters like stirring rate, size of catalyst particle, reaction temperature, reaction time, catalyst loading and initial reactant concentration on the esteri-fication was studied. Four types of kinetic models, pseudo-homogeneous (ideal and non-ideal), Eley—Rideal (ER) and Langmuir—Hinshelwood—Hougen—Watson (LHHW) models were evaluated and the best kinetic model was proposed for the esterification reaction.

The solid acid catalyst, Indion 190, used for the esterification reaction was supplied by "Ion-Exchange India Ltd.". Indion 190 has cross-linked three-dimensional structures of polymeric material, obtained by sulfonation of a copolymer of polystyrene and divinyl benzene (DVB). It is an opaque and faint dark grey coloured solid spherical bead. The ion-exchange resin was dried for 2 h in an air oven at temperature 363.15 K to remove the moisture. The physico-chemical properties of the solid ion-exchange resin catalyst are shown in Table 1.

The esterification reaction was carried out in a 500 ml three neck round-bottom flask. The flask was placed in a heating rota mantle, which contained a heating knob, stirrer and a speed control knob. The rotational speed of magnetic stirrer was varied from 240 to 640 rpm, using the speed control knob. A spiral condenser was connected to the reaction flask vertically to condense the vapours and mix them back with the reacting mixture. A mercury thermometer was inserted into the flask to measure the temperature of the reaction mixture. The accuracy of the thermometer is within ±0.5 K.

The reactants were weighed using a digital electronic balance with an accuracy of ±0.0001 g. In the experiment, equimolar quantities of methanol (32 g) and acetic acid (60 g) were mixed and charged to the reactor. The reaction mixture was heated and when it reached the desired temperature, the catalyst was added to the mixture and the time was noted (t = 0). The temperature was measured by mercury thermometer within an error of ±0.5 K. Samples of the reaction mixture were withdrawn at regular intervals of time. The samples were placed in a refrigerator prior to analysis, to prevent further reaction. The reaction mixture was analyzed by Gas Chromatography (GC) for components of the mixture.

The following reaction takes place in the reacting mixture.

The sorption experiments were carried out for 4 nonreactive binary mixtures at a constant temperature of 298.15 K. The nonreactive mixtures studied were: water—methanol, water—acetic acid, methyl acetate— methanol, and methyl acetate—acetic acid. These experiments were carried out according to the procedure proposed by Popken et al. [12]. The binary sample of known quantity (a total of 10 g) was mixed with the known quantity of catalyst (1.0 g) in 20 ml glass vials. After reaching an equilibrium state in about 2—3 weeks, the samples were analysed using gas chromatography. The difference between the initial and final quantity of binary mixture in the vial was taken as the quantity of adsorbed material.

To find out the swelling nature of the catalyst in the presence of pure components like methanol, acetic acid, methyl acetate and water, experiments were conducted at a constant temperature of298.15 K in sealed graduated cylinder of volume of 20 ml. A known amount of dry catalyst (1.0 g) of known particle diameter was placed in the glass cylinder followed by adding a pure component. The experiments were carried out for each component separately. The solid catalyst and the pure component were allowed to remain in contact with each for about 2—3 weeks, till equilibrium