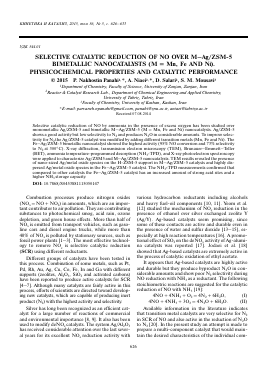 Selective catalytic reduction of NO by ammonia in the presence of excess oxygen has been studied over monometallic Ag/ZSM-5 and bimetallic M-Ag/ZSM-5 (M = Mn, Fe and Ni) nanocatalysts. Ag/ZSM-5 shows a good activity but low selectivity to N2 and produces N2O in considerable amounts. To improve selectivity for N2 the Ag/ZSM-5 catalyst was modified by adding different transition metals (Mn, Fe and Ni). The Fe-Ag/ZSM-5 bimetallic nanocatalyst showed the highest activity (95% NO conversion and 73% selectivity to N2 at 300°C). X-ray diffraction, transmission electron microscopy (TEM), Brunauer-Emmett-Teller (BET), ammonia temperature-programmed desorption (NH3-TPD), and X-ray photoelectron spectroscopy were applied to characterize Ag/ZSM5 and M-Ag/ZSM-5 nanocatalysts. TEM results revealed the presence of nano-sized Ag/metal oxide species on the H-ZSM-5 support in M-Ag/ZSM-5 catalysts and highly dispersed Ag/metal oxide species in the Fe-Ag/ZSM-5 catalyst. The NH3-TPD measurements confirmed that compared to other catalysts the Fe-Ag/ZSM-5 catalyst has an increased amount of strong acid sites and a higher NH3 storage capacity.

Combustion processes produce nitrogen oxides (NOx = NO + NO2) in amounts, which are an important contributor to air pollution. They are contributing substances to photochemical smog, acid rain, ozone depletion, and green house effects. More than half of NOx is emitted from transport vehicles, such as gasoline cars and diesel engine trucks, while more than 40% of NOX is polluted by stationary sources, such as fossil power plants [1—3]. The most effective technology to remove NOX is selective catalytic reduction (SCR) using different reductants.

Different groups of catalysts have been tested in this process. Combination of some metals, such as Pt, Pd, Rh, Au, Ag, Cu, Co, Fe, In and Ga with different supports (zeolites, Al2O3, SiO2 and activated carbons) have been reported to produce active catalysts for SCR [4—7]. Although many catalysts are fairly active in this process, efforts of scientists are directed toward developing new catalysts, which are capable of producing inert product (N2) with the highest activity and selectivity.

Silver has long been recognized as an efficient catalyst for a large number of reactions of commercial and environmental importance [8, 9]. It also has been used to modify deNOx catalysts. The system Ag/Al2O3 has received considerable attention over the last several years for its excellent NOX reduction activity with

various hydrocarbon reductants including alcohols and heavy fuel-oil components [10, 11]. Yeom et al. [12] studied the mechanism of NOX reduction in the presence of ethanol over silver exchanged zeolite Y (Ag/Y). Ag-based catalysts seem promising, since some of these contacts are active and durable even in the presence of water and sulfur dioxide [13—15], especially at high reaction temperatures [16]. A promotional effect of SO2 on the deNOx activity ofAg-alumi-na catalysts was reported [17]. Jodaei et al. [18] showed that Ag-based catalysts are extremely active in the process of catalytic oxidation of ethyl acetate.

It appears that Ag-based catalysts are highly active and durable but they produce byproduct N2O in considerable amounts and show poor N2 selectivity during NO reduction with NH3 as a reductant. The following stoichiometric reactions are suggested for the catalytic reduction of NO with NH3 [19]:

Available information in the literature indicates that transition metal catalysts are very selective for N2 in SCR of NO and also active in the reduction of N2O to N2 [20]. In the present study an attempt is made to prepare a multi-component catalyst that would maintain the desired characteristics of the individual com-

ponents minimizing their negative aspects. To the best of our knowledge, SCR of NO with NH3 over H-ZSM-5 supported Ag-based bimetallic catalysts has not been reported so far. The aim of this work was to investigate catalytic activity and selectivity of Ag/ZSM-5 catalysts in SCR of NO with NH3 and examine, whether selectivity ofAg/ZSM-5 catalysts to N2 can be improved by adding some transition metals (Mn, Fe and Ni). X-ray diffraction (XRD), transmission electron microscopy (TEM), Brunauer—Emmett—Teller (BET), ammonia temperature-programmed desorption (NH3-TPD), and X-ray photoelectron spectroscopy (XPS) were used as tools for analyzing the surface composition, structural properties and chemical states of metal components in the prepared catalysts.

Ag/ZSM-5 nanocatalysts with various loadings of Ag (1, 3, 5 and 8 wt. %) were prepared by the incipient-wetness impregnation technique and all bimetallic nanocatalysts with 5 wt. % Ag and 2 wt. % transition metal were prepared by the simultaneous impregnation method. The precursors of metals were AgNO3, Ni(NO3)2 • 6H2O, Fe(NO3)3 • 9H2O, and Mn(NO3)2 • • 4H2O and H-ZSM-5 obtained from "Zeochem Int" with SiO2/Al2O3 = 50 was used as a support. Typically, 1 g of H-ZSM-5 zeolite was added to an aqueous solution containing the calculated amounts of silver nitrate and transition metal nitrate, followed by continuously stirring at 45°C until the slurry became completely dry. Then obtained samples were dried at 110°C overnight and calcined at 600°C for 4 h in air.

The evaluation of the catalysts activity for the SCR of NO with NH3 was performed at atmospheric pressure in a fixed bed continuous flow reactor (i.d. 8 mm). In each run, 0.2 g of powder catalyst was placed in the reactor between two plugs of quartz wool and the feeding gas (1000 ppm NO, 1000 ppm NH3, 5% O2 + Ar) was introduced in a 200 ml/min flow. Prior to the catalytic experiments, the catalysts were pretreated in flowing oxygen (5% O2 in Ar) for 20 min at 150°C to remove possible impurities adsorbed on the zeolite surface. The activity tests were performed over the temperature range of 100 to 400°C with a step of 100°C. The concentration of N2 (as selective product) and N2O (as nonselective product) in the outlet of the reactor was measured using a gas chromatograph (model 2010 plus, "Shimadzu", Japan) equipped with a thermal conductivity detector (TCD) and molecular sieve column to separate N2 and N2O.

From the concentration of the gases at the steady state, NO conversion and selectivity to N2 were calculated:

([N2] + [N2O])out where "NO conversion" stands for the fraction of NO converted to reduction products (N2 and N2O). The subscripts "in" and "out" indicate the inlet and outlet concentrations at the steady state, respectively.

The structure of the catalysts was analyzed by powder X-ray diffraction (XRD) at room temperature with a D500 diffractometer ("Siemens") using CuZ"a radiation (X = 0.154050 nm). The diffractogramms were recorded within the 29 range of 5°—70° with a scanning rate of 0.016 s-1. The morphology of the prepared catalysts was observed using transmission electron microscopy (TEM) using a JEOL 2000 electron microscope ("JEOL", Japan) operated at 200 kV The catalysts were first dispersed in water by sonication, placed onto a carbon film deposited on copper grids (300 mesh, 3 cm diameter), and left to dry.

BET surface area, pore volume and pore diameter were calculated from the measurements of N2 adsorption at -196°C using NOVA 2000 Series ("Quantachrome", USA). Prior to the adsorption—desorption measurements, all samples were degassed at 350°C in N2 flow for 16 h.

NH3-TPD experiments were carried out using an all-glass apparatus, with a thermal conductivity detector GC-15A ("Belcat", Japan). The detector was calibrated using the desorption of a known amount of ammonia from [Ni(NH3)6]Cl2. Prior to the measurements, about 200 mg of sample was activated by heating at 500°C for 1 h, followed by cooling to 100°C for 5 min and introducing ammonia. Physically adsorbed ammonia was removed by purging with helium at 100°C for 2 h. The NH3-TPD of the samples was carried out by increasing the cell temperature linearly from 100 to 900°C at a heating rate of 10°C/min and a helium flow rate of 50 cm3/min.

To determine the surface composition of the catalysts and oxidation state of metals, X-ray photoelectron spectroscopy (XPS) data were obtained with a VG Escalab 220 XL spectrometer using Al^a radiation (1486.6 eV) with a monochromator. The spectrometer was operated at 15 kV and 20 mA. The vacuum in the main chamber was close to 5 x 10-7 Pa. All binding energies were corrected using a C1s photoelectron peak at 285 eV as a reference and peak decomposition was performed using the Eclipse software from VG.

Fig. 1. NO conversion (a) and selectivity for N2 (b) for Ag/ZSM-5 nanocatalysts with different Ag loading in the NH3-SCR process.