научная статья по теме THE ACTIVITY OF TITANIUM SILICALITE-1 (TS-1): SOME CONSIDERATIONS ON ITS ORIGIN Химия 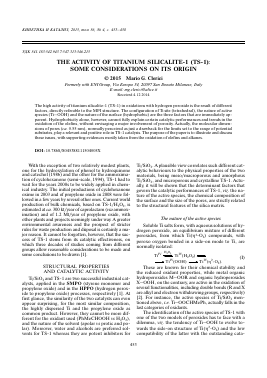 Текст научной статьи на тему «THE ACTIVITY OF TITANIUM SILICALITE-1 (TS-1): SOME CONSIDERATIONS ON ITS ORIGIN»

THE ACTIVITY OF TITANIUM SILICALITE-1 (TS-1): SOME CONSIDERATIONS ON ITS ORIGIN

The high activity of titanium silicalite-1 (TS-1) in oxidations with hydrogen peroxide is the result of different factors, directly referable to the MFI structure. The configuration of Ti site (tetrahedral), the nature of active species (Ti—OOH) and the nature of the surface (hydrophobic) are the three factors that are immediately apparent. Hydrophobicity alone, however, cannot fully explain certain catalytic performances and trends in the oxidation of the olefins, without envisaging a major involvement of porosity. Actually, the molecular dimensions of pores (ca. 0.55 nm), normally perceived as just a drawback for the limits set to the range of potential substrates, play a relevant and positive role in TS-1 catalysis. The purpose of the paper is to illustrate and discuss these issues, with supporting evidences mostly taken from the oxidation of olefins and alkanes.

With the exception of two relatively modest plants, one for the hydroxylation of phenol to hydroquinone and catechol (1986) and the other for the ammoxima-tion of cyclohexanone (semi-scale, 1994), TS-1 had to wait for the years 2000s to be widely applied in chemical industry. The initial productions of cyclohexanone oxime in 2003 and of propylene oxide in 2008 were followed in a few years by several other ones. Current world production of bulk chemicals, based on TS-1/H2O2, is estimated at ca. 300 kt/year of caprolactam (via ammox-imation) and of 1.2 Mt/year of propylene oxide, with other plants and projects seemingly under way. A greater environmental awareness and the prospect of stricter rules for waste production and disposal is certainly a major reason. It cannot be forgotten, however, that the success of TS-1 stems from its catalytic effectiveness, on which three decades of studies coming from different groups allow reasonable considerations to be made and some conclusions to be drawn [1].

Ti/SiO2 and TS-1 are two successful industrial catalysts, applied in the SMPO (styrene monomer and propylene oxide) and in the HPPO (hydrogen peroxide to propylene oxide) processes, respectively [1]. At first glance, the similarity of the two catalysts can even appear surprising, for the most similar composition, the highly dispersed Ti and the propylene oxide as common product. However, they cannot be more different for the oxidant used (PhMeCHOOH vs H2O2), and the nature of the solvent (apolar vs protic and polar). Moreover, water and alcohols are preferred solvents for TS-1 whereas they are potent inhibitors for

Ti/SiO2. A plausible view correlates such different catalytic behaviours to the physical properties of the two materials, being meso/macroporous and amorphous Ti/SiO2, and microporous and crystalline TS-1. Actually, it will be shown that the determinant factors that govern the catalytic performances of TS-1, viz. the nature of the active species, the chemical composition of the surface and the size of the pores, are strictly related to the structural features of the silica matrix.

The nature of the active species

Soluble Ti salts form, with aqueous solutions of hydrogen peroxide, an equilibrium mixture of different peroxides, from which Ti(n2-O2) compounds, with peroxo oxygen bonded in a side-on mode to Ti, are normally isolated:

These are known for their chemical stability and the reduced oxidant properties, while metal organic hydroperoxides M—OOR and organic hydroperoxides X—OOH, on the contrary, are active in the oxidation of several functionalities, including double bonds (R and X are alkyl and electron withdrawing groups, respectively) [2]. For instance, the active species of Ti/SiO2 mentioned above, i.e. Ti—OOCHMePh, actually falls in the last categories of oxidants.

The identification of the active species of TS-1 with one of the two models of peroxides has to face with a dilemma, viz. the tendency of Ti—OOH to evolve towards the side-on structure of Ti(n2-O2) and the low compatibility of the latter with the outstanding cata-

lytic activity of TS-1. A third option could be represented by Tirv(H2O2), formed by the simple adsorption of hydrogen peroxide on Ti sites, which is a conceivable active species alike other hydrogen peroxide ad-ducts with Lewis acidic metal sites. The stability of such a complex is, however, questionable in view of the tendency of Ti—OSi bonds of TS-1 to undergo reversible solvolysis with water, hydrogen peroxide and other protic molecules, easily even at room temperature [3]. Actually, the substitution of the larger sized Ti+4 (42 pm) for Si+4 (26 pm) in the MFI structure causes a significant strain of the lattice, otherwise relaxed by the opening of one Ti— OSi bond:

At the same time, Ti can also expand the tetrahe-dral coordination imposed by the MFI structure to the octahedral one, preferred by Ti compounds. Thus, Ti(H2O2) initially formed by the adsorption of hydrogen peroxide would transform into a Ti—OOH hydroperoxide, falling again into early dilemma.

The solution to the problem of the active species is offered by the stability of the tripodal anchoring of Ti—OOH onto the crystalline framework of TS-1, a chance rarely available for other Ti compounds (Eq. (II)). The reversible opening of a second Ti—OSi bond that would favour the inert Ti(n2-O2) peroxide, albeit feasible, is regarded to be restrained by the crystalline lattice [4]. It is possible that a certain amount of Ti is in the form of Ti(n2-O2), but theoretical studies and the acidity developed by TS-1 on chemisorption ofhydrogen peroxide are against a major formation of it. Actually Ti—OOH is compatible with the significant acidity ofTS -1/H2O2 system, while Ti(n2-O2) is not [2, 3].

On Ti/SiO2 catalyst, in which a crystalline lattice is missing, a similar active species, viz■ Ti—OOR, remains stable because of the bad leaving properties of alkoxy group.

Nature of the surface and its effects

The use of hydrogen peroxide implies the presence of water even if an organic solvent is used, for water is added with the oxidant and is the byproduct of the oxidation. Normally, it implies also a metal catalyst selected from Group IV—VI transition metals, which are strongly oxophilic. The consequence is that water eas-

ily adsorbs on the metal centre and solvates it, hindering the approach of apolar substrates. Basically, the unsuitability of hydrogen peroxide for epoxidations with soluble Ti complexes is a matter of water inhibition. There are, however, exceptions to the rule, represented by certain olefins and experimental procedures which allow to circumvent the negative effect of water. Allylic alcohols, for instance, can be epoxidized with aqueous hydrogen peroxide due to the anchoring of the olefin on the metal centre trough the hydroxyl group, in competition with water. The use of an organic solvent, e.g., dioxane, combined with the continuous removal of water by azeotropic distillation allowed the epoxidation of propylene to be carried out successfully despite the formation ofwater in the reaction medium (caution, organic solutions ofhydrogen peroxide are dangerous and, above 20—25 wt. %, can detonate!).

In this last example, the presence ofwater in the reaction medium is inconsequential because its concentration in the proximity active sites is kept below a certain level by a proper operative approach. In principle, the same objective could be achieved in solid catalysts by a physical property functioning as a selective barrier between the zone of reaction and the zone in which water builds up. A hydrophobic surface well exemplifies the concept. Water would remain in the extra pore volume, viz. in the liquid phase in which the catalyst is suspended, while its physisorption in the hydrophobic pores would be hindered. On the contrary, the phys-isorption of apolar substrates would be promoted, thus realizing the conditions of a low concentration of water and a high one of, e.g., an olefin, in the proximity of the active site, which could even be oxophilic without catalytic performances being penalized by such a feature [5]. High silica zeolites like TS-1 and low-Al ZSM-5 belong to such a category of catalysts. Their hydrophobicity, measured by different means such as selective adsorption tests and the Hydrophobicity Index (HI), was known already at the end of1970s [6, 7]. Actually, surface hydrophobicity was, together with Ti—OOH active species, one of the cornerstones of first hypotheses made on the origin of the activity of TS-1 and, since then, repeatedly proved [8, 9].

Normally, the effects of hydrophobicity are not clearly distinguishable from other surface effects (vide infra). In one case, concerning Ti-Beta catalysts, the sole function of hydrophobicity was clearly recognizable [10]. Ti-Beta zeolites can be obtained by two different methods, i.e., Ti-P(OH) by the hydroxide synthesis and Ti-P(F) by the fluoride one. The former preparation produces a small crystal material with a surface rich ofSi—OH (relatively hydrophilic), whereas the second one produces a large crystal material with a low Si—OH density (relatively hydrophobic). Both catalysts were compared for the epoxidation of methyl oleate with hydrogen peroxide, in which Ti-P(OH) showed a conversion of the substrate of 27.6% with a 17.6% hydrogen peroxide efficiency, while Ti-P(F) showed